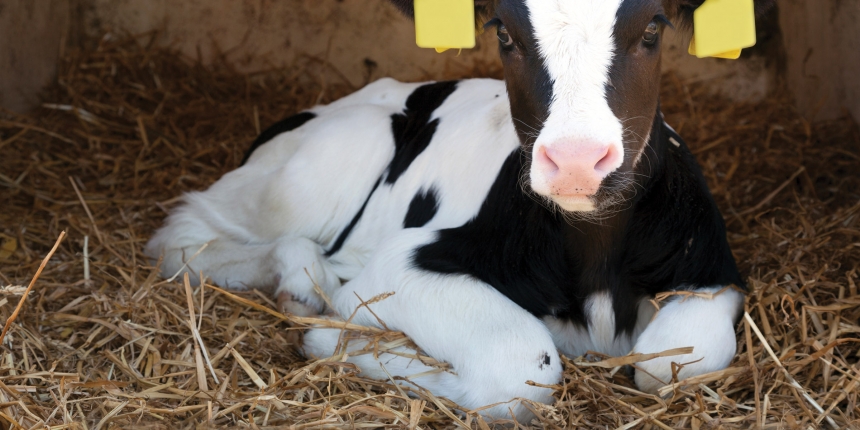 Calves are born without a developed rumen.  In the first weeks of life they depend mainly on the abomasum, to digest milk.  The abomasum makes up 60% of a newborn calf’s stomach capacity but by the time the calf is three to four months old, the rumen is fairly well developed and the abomasum makes up only 20% of total capacity, and eventually only 8% of stomach capacity.  Since solid feed is cheaper than milk or milk replacer, dairy producers typically try to get calves eating starter and a little forage as soon as possible and generally wean calves off milk/milk replacer fairly young.

Consuming starter helps develop the rumen, but it also causes fermentation and produces acid, resulting in a dip in rumen pH.  A low rumen pH might actually be a necessary part of normal rumen development for young calves on starter feed, but a dramatic drop in pH is not healthy.  Sudden increases in starter intake can cause too much acid production all at once, resulting in acidosis.
Rumen acidosis in calves creates a drop in rumen pH, which if it lasts for a long time can cause damage to the rumen.  Dr. Scott Poock, Associate Extension Professor, University of Missouri, says most dairies normally don’t have much trouble with acidosis in their young heifers unless there are dramatic diet changes.

It can occur in calves that are fed very little milk and a lot of grain; the rumen is still developing in young calves and isn’t ready to handle high-starch diets. Calves fed less milk or milk replacer early in life may have increased starter intake they aren’t ready for, resulting in acidosis. The rumen takes time to develop.

Acidosis can also occur in calves that are fed a lot of milk and then suddenly switched to grain.  “Where we tend to see it and have trouble with it is with accelerated feeding of young calves on milk or milk replacer.  If we ramp up the volume of milk or milk replacer, a calf that would normally be starting to consume more grain won’t eat as much as we’d expect, because she’s already full,” he says.

Then when it’s time to wean, there are problems if the calf is weaned abruptly.  “If weaned abruptly, the calf no longer has all that milk or milk replacer and is hungry, and loads up on the grain.  The increase in grain consumption is too fast, and those calves may develop acidosis and rumenitis,” says Poock.  If calves aren’t receiving enough milk or milk replacer nutrition at weaning, they start the weaning process hungry and try to eat too much starter.

The starter formulation itself can play a role in acid development but this is minor compared to the amount of starter consumed.  No matter which starter is fed, managing intake to avoid big dips in pH is the best way to help prevent acidosis.

“What we’ve learned is that we have to make a slower transition.  We still like the accelerated feeding because it’s a good program, but we learned that we should take longer to wean them.  Instead of trying to wean them early at 42 days we might want to wait until 60 days or 72 days,” he says.

“Even more important than weaning a bit later is not doing it abruptly.  Instead of abrupt weaning or just taking a week to wean, we try to make this transition over a 2-week period.  Let’s say we are feeding three quarts of milk or milk replacer twice a day, so for the first week we drop it to two quarts twice a day, and then the second week drop to two quarts once a day.  The transition just needs to be something a little more gradual, taking more time so that the calves will start eating grain at a slower pace instead of loading up so much because they are hungry,” he explains.

“We had to learn about that, and once we learned to wean more gradually, the calves don’t get acidosis or rumenitis and are able to transition better.”  Most producers are pretty good at realizing when something isn’t quite right, and adjust the feeding program to do what’s best for the animal.

It’s crucial to monitor calves closely and be tuned in to how they are doing.  “If we don’t do it right, the calves may gain really well on the accelerated milk program, but then if we give them acidosis or rumenitis we lose that gain.  Now we’ve found that if we do it right, we still get that early gain and full potential from the accelerated program but we don’t cause that setback at weaning; the calves continue gaining and it’s good to see these calves doing so well,” says Poock.

If calves do develop acidosis, the signs are fairly easy to see.  “They have loose stools that are sometimes bubbly, and the calves go off feed a little,” he says.  They don’t feel good, with the serious gut upset.  If they are off feed, the next problem is that when they start to get better and are hungry again, they may overload on grain again and it becomes a vicious cycle.  Typically, calves with acidosis will go off feed, and since there’s no substrate to produce more acid, the rumen stabilizes on its own—but then the calf is hungry again and may overload on grain.

If this cycle goes on long enough you can easily see these ups and downs in rate of gain, especially if producers are weighing the calves.  “I like to chart the calves, so whenever we weigh them we put them into a program that will plot their gain on a graph so we can see if they are hitting our target.  If you are watching this and the calves are getting acidosis, what you’ll see is that they are right on target when they are weaned, but the next time you weigh them they’ve dropped below the expected rate of gain.”  Then they recover, feel better, and start gaining again.

“By contrast, if we do it right, those calves keep hitting the targets all along the way, without those setbacks,” he explains.  The calves do much better if a person can keep them on a rising plane rather than the continual ups and downs.

For calves off feed due to suspected acidosis, a person should be conservative with starter as those calves come back to health and start eating again.  If a calf didn’t consume any starter the day before, don’t suddenly offer a lot of feed. Instead, gradually reintroduce starter and closely monitor intake.

“If you are having some acidosis problems, the initial concern is gut health, but long-term effects are a poorer-doing calf.  The hair coat won’t be as nice and sleek; the calf will be a little rougher-looking,” he says.

Rumen acidosis could potentially cause ruminal scarring, which, in the long run, interferes with nutrient absorption and overall rumen health.  Calves experiencing acidosis may also be predisposed to ulcers.  A calf with rumen acidosis may also have poor feed efficiency long term, resulting in lower milk production as a cow or poor finishing performance in steers.

As the calves grow older and are on growing rations a person still needs to be careful not to overdo the grain and starch, to avoid problems with acidosis.  “Once the producers figure out how to feed them, it smooths out those growth curves and the calves do better and it becomes fairly simple.”

It’s also important to try to minimize stress in calves, since stress (of any kind) may decrease appetite. Disruptions to a calf’s normal routine can create stress and disrupt the gut, which alters the microbiome and increases the odds for acidosis.

The calf goes off feed for a while and then is hungry, and loads up too much.  Weather changes can also causes shifts in eating patterns.  Hot weather may cause calves to eat less, then the weather breaks and calves have a sudden increase in grain consumption.  Or, cold weather comes suddenly and starter consumption increases—especially if calves don’t have enough milk or milk replacer to provide the needed energy to keep warm.  Water quality or availability can also be a factor, if calves are not drinking enough for some reason—because if they aren’t drinking they won’t eat as much—and then later may load up again. 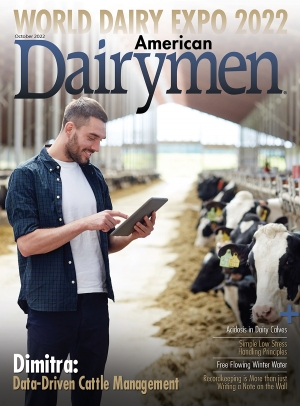