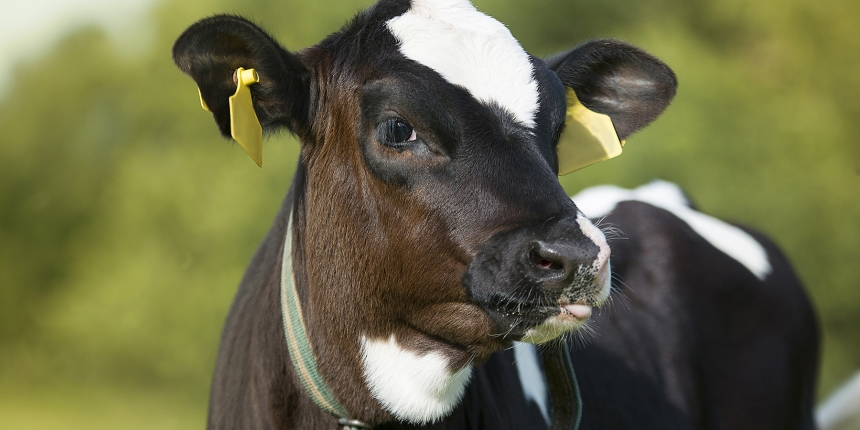 There are many clostridial diseases in cattle, including blackleg, malignant edema, “redwater” etc. The most common type of enterotoxemia (toxic intestinal infection) in young calves is caused by Clostridium perfringens, found in the GI tract of livestock and passed in feces. These bacteria rarely cause gut infections in adult cattle, but can cause sudden death in calves.  If these bacteria start multiplying rapidly, they produce toxins that damage the gut.

If this condition is not treated quickly and reversed, toxins go through the damaged gut wall into the bloodstream, the calf goes into shock, and dies within a few hours.  The calf may be healthy in the evening and dead the next morning.  These calves often die before they develop diarrhea. If diarrhea does occur, it may contain blood or tissue.

This is different from most cases of “scours” in which the calf is off feed and dull before he breaks with diarrhea.  Clostridial gut infection has sudden onset.  The calf may have a distended belly or acute gut pain--getting up and down, staggering around.  Before long, however, he goes into shock.  If this condition is not reversed, he slips into a coma and dies. In other instances, the calf may just be dull and bloated (abomasum distended) and might not die as quickly.

Enterotoxemia (also called purple gut) is almost always caused by an overgrowth of Clostridium perfringens. These are Gram-positive, spore-forming, anaerobic bacteria commonly found in soil, water, contaminated or improperly thawed colostrum or milk, calf-housing environments, and the normal bovine intestinal tract. This makes diagnosis difficult after a calf dies, since Clostridial organisms that normally live in the gut can rapidly multiply shortly after death.  For accurate results from laboratory diagnostics, samples must be taken immediately from a euthanized animal or shortly after death before this overgrowth occurs.

Accurate diagnosis is important, to determine what management procedures might successfully prevent and control future incidence of disease. These infections can display the same signs as scours caused by salmonella, coccidia and some forms of E. coli, so it is important to work with your herd veterinarian to perform diagnostic tests to verify that the diagnosis is correct.

There are five different subtypes of Clostridium perfringens--types A, B, C, D and E--and classified based on the type of lethal exotoxin they produce.  Though all subtypes have the ability to produce the Alpha toxin, type A usually produces a greater amount.  Signs of a type A infection include inflammation of the abomasum and/or enteritis in young calves.  These toxins can directly affect the tissues where growth of the organism is occurring, and absorption toxins into the blood stream is not necessary.  Abomasal bloat, with or without abomasal ulceration, is common.  Necrosis (tissue death) of the abomasal and small intestinal surfaces may also be present.

Type D produces mainly Epsilon exotoxin, which is rapidly absorbed because of damage to the intestinal lining. It is the third most lethal toxin produced by Clostridial bacteria next to botulism toxin and tetanus toxin.  Type D can produce both local and systemic signs and causes severe damage to gut lining.  It thus slips into the bloodstream and affects multiple organs such as the heart, lung and brain.  Since it requires intestinal enzymes to become active, it is uncommon in young calves due to presence of trypsin inhibitors.  If it occurs in calves, they are usually between 1 and 4 months of age.

Type E is associated mainly with the Iota toxin.  Like Epsilon toxin, the Iota toxin also requires trypsin to be active, and is uncommon in young calves.

The underlying cause of most Clostridial infections is presence of large amounts of rapidly available carbohydrate and/or protein that support rapid multiplication of Clostridial spores in affected areas of the GI tract.  Since Clostridium perfringens exists in the environment, most calves have at least one type of this organism in their GI tract.

If clostridial infection is diagnosed, the calf-raising operation should be closely evaluated to determine why the disease is appearing.  Inconsistent feeding schedules, abrupt dietary changes, and stressful events that disrupt feed intake can trigger outbreaks.

Vaccinating cows ahead of calving with C. perfringens Type C and D toxoid (to produce antibodies which the calf obtains via colostrum) or vaccinating calves at birth or soon after helps reduce or eliminate incidence of this deadly enterotoxemia.
There are good vaccines for Type C and D, yet many herds still experience this type of gut infection in calves because a different genotype is prevalent.

Traditionally the most common cause in young calves was type C.  Today, with vaccination of cattle against type C and D, there are relatively few type C and D.  Yet some dairies fail to vaccinate, so infections still occur.  Also, more than 90% of infections today are type A, and this type is not included in typical clostridial vaccines.  The next most common would be type C (about 4 to 5%), and then type D.  In calves with hemorrhagic enteritis and sudden death, type E may be the cause, and we don’t have any vaccines that include that one.

This illustrates the need for diagnostic work.  Once a lab gets the “bugs” cultured, they need to be genotyped so you know exactly what you are dealing with.

“The best way to prevent acute toxic gut infections in very young calves caused by Clostridium perfringens is to vaccinate the dam,” says Robert Callan, Colorado State University.  “Then the proper antibodies will be in the GI tract as soon as the newborn calf nurses, to neutralize the toxin.  When we vaccinate calves themselves at birth, it takes 10 to 14 days to develop peak antibody levels and strong immunity, and maybe longer, since 2 doses of vaccine are often necessary,” he says.  Vaccinating the calves can be beneficial, however, in herds that experience the worst problems in older calves.

“The C. perfringens type C and D antitoxin can also be helpful, especially in young calves born to dams that have not been vaccinated,” he says.  Some people routinely give antitoxin at birth to calves (if they know the dam was not vaccinated, or if they purchased the cow and don’t know her vaccination history), or give antitoxin to any calf that develops signs of disease.

“But we still see some herds with calves dying in spite of 8-way vaccine or C and D toxoid or antitoxin.  When we culture intestinal contents of calves with enterotoxemia, there is often high growth of C. perfringens type A and not C or D,” says Callan.

All cattle should be routinely vaccinated against clostridial diseases with a 7 or 8-way product that includes types C and D.  If a herd is still experiencing problems, there is another vaccine for Type A.  “It should be given to the dam before calving, to provide antibodies in her colostrum,” says Callan.  If cases are occurring in calves older than a month of age, the calves themselves should be vaccinated.

Some cases are caused by type E, however.  Producers can use autogenous products, created from cultures taken from their cattle.  Veterinarians have done pathology work on calves that died, finding different genotypes--and then had an autogenous vaccine created against that specific type. Some producers have had good luck with that approach.  Various labs around the country will take the cultures and generate their own vaccine for that specific organism, at a reasonable cost.

In an outbreak, some veterinarians recommend giving C & D antitoxin subcutaneously.  It should be injected under the loose skin behind the shoulder blades.  C & D antitoxin provides protection in the first 10 days.

Management of calves is also important.  Milk feeding schedules can be altered, providing milk or milk replacer in smaller amounts such as 3 daily feedings instead of 2.

Abomasal bloat is often blamed on ulcers, but these conditions are generally two very different problems, according to Dr. Geof Smith (North Carolina State University).  “Ulcers are probably stress related, whereas bloat is more nutritional in origin.  Bacteria can be involved in some cases of bloat.  These bacteria come from the soil or are already present in the GI tract.  There are probably other risk factors as well,” he says.

“Many of these problems are man-made.  Often the dairy calf is on a feeding schedule and there might not be good mixing of milk replacer.  Feed consistency may vary.  Here in North Carolina, once-a-day feeding of dairy calves is popular, which can be a risk factor, as is cold milk replacer,” says Smith.

Affected calves go off feed and become dull.  In severe cases they are usually dehydrated, show signs of abdominal pain (colic—kicking at the belly, getting up and down repeatedly) and eventually go into shock and die within 6 to 48 hours.  At necropsy the abomasum is distended with gas, there is edema in the abomasum and forestomach, with hemorrhage and necrosis in the stomach lining.  Smith says some farms have frequent outbreaks.

It’s not always easy to figure out the cause.  “Some people try clostridial vaccines, but the bloat may be more than just bacterial infection; there are usually management issues involved, and several factors working together.”

Other kinds of bacteria may be involved in causing bloat in young calves.  “Abomasal bloat generally affects calves one to three weeks of age and we usually don’t know exactly what causes it,” says Smith.

It may be due to excess fermentation of high-energy contents in the GI tract, allowing gas-producing bacteria to proliferate.  C. perfringens, Sarcina ventriculi or Lactobacillus species may play a role.  According to Smith, large amounts of fermentable carbohydrates in the abomasum (from milk, milk replacer or high energy oral electrolyte solutions) along with presence of fermentable enzymes produced by bacteria could lead to gas production and bloat.  This process could be exacerbated by anything that slows movement of ingesta through the tract.

These calves may or may not have diarrhea.  “Many have a big belly on both sides—rather than the typical rumen bloat seen in older animals.  The whole abdomen looks full, rather than just the left side,” says Smith. 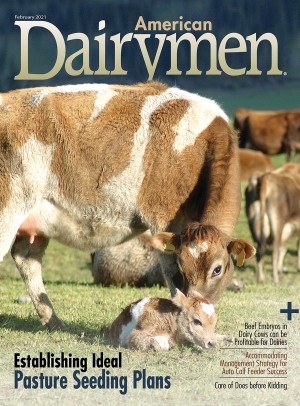 In this IssueThe World Dairy Expo, “Making HistoryEntering the Dairy Beef Market - Is It For You?TMR Mixers - Many Options to Fit Any PurposeThe Dairy Goat Industry TodayThe Know-how For Calf Feeding For Almost 50...
view all issues