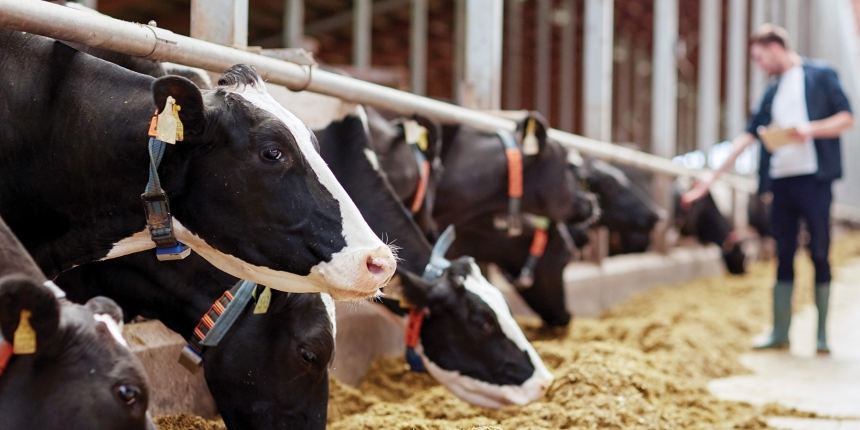 Ideally, we want our cows to respond to what we ask them to do—walk calmly into the milking parlor, be easily milked, go readily through a gate without running off, load willingly into a truck, and so on.  All too often when a cow does not behave the way we want her to, we blame the cow instead of ourselves.

Cattle react to human actions.  Every time we handle cattle we are positively or negatively setting the stage for how they’ll react to handling in the future.  They have excellent memories; a negative experience can have lasting repercussions.

Low-stress handling strategy has ramifications far beyond understanding the philosophy involved.  Calm, relaxed cattle produce more milk.  Stressed cattle are less productive and can also be a danger to themselves and their handlers.  Improper handling also opens the door to adverse public opinion regarding food animal production, and plays into the hands of special interests such as animal rights groups.

The goal of everyone on the farm is to maximize production of wholesome food.  One of the most important routes to that goal is humane and conscientious handling of cattle from conception to table.  The management of a dairy requires interaction with the cattle many times each day, taking them to and from the milking parlor, putting them into another pen, walking through pens to check for signs of sickness, cows coming into heat, etc.  We can do ourselves and our animals a huge favor by trying to understand cattle behavior and learning how to work with their natural behavior rather than against it.

Cattle Behavior
Our understanding of cattle behavior has improved over the past several decades.  Science has examined the basics of natural behavior and verified some of the premises that good stockmen have utilized for centuries of cattle handling.  Some primitive societies that depended on cattle for their lives and livelihood understood the human/cattle relationship; even today in some cultures young children take the herds to and from grazing areas daily—controlling cattle very easily on foot.  Modern society has generally lost touch with how to interact with livestock.  Dairy stockmanship is simply a rediscovery of basic, simple truths of low-stress ways to influence cattle behavior.

One of the pioneers of modern science’s examination of animal behavior was Dr. B. F. Skinner (University of Minnesota) in the 1940’s.  His view of behavior analysis focused on behavior as a subject in its own right—a natural phenomenon—rather than as a manifestation of something happening in the brain or mind.  In other words, cattle (as prey animals) have natural reactions to the environment around them, and react in predictable ways to certain stimuli.  Humans tend to assume that cattle react because they are afraid or think something will hurt them.  We attribute behavior to a mental cause, rather than accepting it as a natural reaction to what we do when we work with them.

If we can realize that cattle are simply reacting to our actions, we can look closer at our actions and deliberately change the way we handle cattle.  If we think before we act, letting the cow (where she is and what she is doing) determine how we act, we can effectively control her behavior by providing the proper stimulus for the desired reaction.

Skinner’s view of behavior as a natural phenomenon gives us a starting point for accepting that the “cow is always right” and that we need to work with her natural behavioral reactions—rather than against them—to manipulate her actions.  Stimulation, to create movement, is generally referred to as pressure.  If we want her to move a certain direction we create pressure on her personal space (often called the flight or fight zone).  When a person encroaches upon that “safe” zone, the animal feels threatened (as it would if a predator approached too closely) and reacts by leaving.

Since every animal has a different flight/response distance (depending on prior experiences with humans and many other factors), the human handler must closely observe the effects of pressure to achieve the desired result.  Cattle that are at ease with humans can be approached much more closely before they react.  The handler always needs to “read” the cow and know when to apply pressure and when to back off.  Once a person understands the basic principles of stockmanship, it’s easy to induce cattle (individually or as a herd) to move, turn or stop—simply by applying and manipulating pressure at the proper time and place (your position in relationship with the cattle).

Research studies show that behavior in animals is a product of biological variables (including physiological status and health), environmental variables (including prior experiences of that animal) and species history (whether the animal is a predator, or prey).  Prey animals like cattle evolved with survival tactics like keeping an eye on anything that approaches, listening for danger sounds, and moving away if another creature gets too close.

As herd animals, they also tend to stick together (another survival tactic) and can thus be herded and moved as a group.  Cattle handlers can use all the natural tendencies of cattle to advantage, by understanding the way cattle respond to their environment (experiencing their world through their 5 senses) and being careful not to alarm or upset them—and using position and pressure (approach and retreat) to encourage cattle to move, go the proper direction at proper speed, or halt.

Low-Stress Handling Improves Human/Animal Interactions
The late Bud Williams was a leader in teaching low-stress handling concepts to beef producers around the world for more than 30 years. His methods apply equally well to handling dairy cattle.  The University of Minnesota’s College of Veterinary Medicine took a strong interest in improving dairy stockmanship and several faculty members attended many of Bud Williams’ stockmanship schools, seeking to improve their personal handling skills with dairy cattle.

This goal expanded into a firm commitment to implement dairy stockmanship methods on commercial dairy operations, and several University veterinarians provided live-course training for people interested in improving their cattle handling methods.  Low-stress handling techniques always improve the working relationship between cattle and humans, resulting in a much more satisfactory outcome for both.

Dairy veterinarians are often involved in helping dairy owners and their employees with training programs for dairy workers.  The long-term goal for the UM dairy stockmanship programs was to develop useful training resources for dairy veterinarians—to help improve their own stockmanship skills as well as to facilitate on-farm training with dairy clients.  This was an opportunity to improve the handling skills of people who work with the cattle.

Dairy workers are sometimes frustrated by uncooperative behavior of cattle, and the cattle are stimulated into negative behavior by the inexperience or poor techniques of the handlers.  Most human tendencies in handling cattle are counterproductive because we don’t pay enough attention to the cow and what she is telling us.  Our actions should always be dictated by what that particular cow (or herd) perceives and how she (they) will react to our actions.  Many of the habitual ways we handle cattle are the wrong way.

The great value of dairy stockmanship training programs is that it focuses more on what to DO rather than telling people what NOT to do.  Finding out that cattle handling is actually very simple and easy is a win-win situation for all concerned—the dairyman who wants the cows to be healthy and highly productive, the worker who handles the cattle, and the animals themselves.  The cattle can be more relaxed, trusting and comfortable with the people who interact with them on a daily basis.

Animal Welfare Issues
According to the American Veterinary Medical Association, animal welfare involves how animals cope with the conditions in which they live.  Ensuring animal welfare is a human responsibility that includes humane handling as well as proper care and housing.  The positive effect of better cow handling has been demonstrated by Australia’s Animal Welfare Science Centre (internationally recognized as a leading research and educational facility of animal welfare topics).  All people who work with cattle (veterinarians, producers, hired help) should be interested in the welfare of the animals under our care—seeking to improve their treatment and well-being.

There is a vast difference between animal welfare organizations and animal rights advocates.  Animal welfare groups utilize scientific research and evidence as a basis for guidelines involving animal care and handling.  By contrast, animal rights proponents believe that animals have the same rights as humans and that we should not use animals for any purpose.  Their goal is to ban the use of animals for entertainment or profit, or for use as food.

The news media often picks up on instances of animal abuse, and the animal rights activists try to insinuate that all stockmen mistreat the animals in their care.  As dairymen, our best defense against a growing movement to ban or limit our ways of interacting with animals is to be strong advocates of animal welfare, and show that we treat our animals well—not only in their feed and care but also in their handling.

It’s not enough to tell dairy workers to not beat the animals.  We must provide positive alternatives and solutions/ways to handle cattle in difficult situations.  The best solution is to teach cattle handlers about low-stress stockmanship.

Stress In Dairy Cattle
The National Dairy FARM (Farmers Assuring Responsible Management) Program states as a best management practice that “employees should be properly trained to handle animals with a minimum of stress to the animal, and the consequences of inhumane handling should be known and enforced.”  This program aims to demonstrate that U.S. dairymen are committed to providing the highest standards of animal care and quality assurance.  Low stress cattle handling is part of this picture, but this raises the question of what constitutes “low” verus “high” stress.

The science of stress biology is helping provide these answers.  A stressor is defined as an event that threatens or potentially threatens the homeostatic balance (internal stability of normal body states).  A stress response is the body’s attempt to re-establish this balance after encountering a stressor.  The stress response, rather than the stressor, is often physiologically damaging to the body and interferes with proper function of the immune system.  Stressors can be physical (extreme heat, cold, starvation, pain), but psychological factors can also trigger a stress response—which probably evolved as an adaptive survival mechanism.

There is no single way to test for stress because the body deals with stress in many different ways—with both behavioral and physiological responses.  In general, however, stressors provoke some degree of increased cortisol secretion.  Cortisol and adrenalin produce most of the changes that form the physiological stress response.  Blood samples have been the traditional way to evaluate cortisol level, but taking the samples can be stressful to the animal.  Researchers are looking at other ways to determine cortisol levels.  Since cortisol metabolites are excreted in urine and feces, this may be the best way to measure stress levels in the future.

University of Minnesota Veterinary Diagnostic Lab did a study using Radio-Immuno-Assay to measure cortisol metabolites in bovine feces.  This may become an important tool, complementing a behavioral analysis study of dairy cattle, in future research projects looking at whether a particular handling technique can be considered low stress. 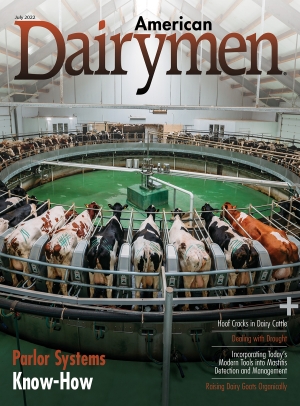 In This IssueHeat Stress Abatement in Dairy FacilitiesLameness Prevention with Proper Hoof CareIs it Worth Investing in Manure Digesters?From Field to Dairy: How Whole Cottonseed Gets to YouBuilt Around Cow Comfort....

In This IssueDairy Stockmanship – Low-Stress HandlingStockpiling and Rotation Grazing – Extending your Pasture SeasonWeighing In on Scale System TechnologiesTailored Solutions for Common Fly Control...

In This IssueFreemartin HeifersOptimizing the Efficacy of Fly control in and around calf hutches in the U.S.Keeping Flies At BayMilk Point Peace of MindA Bit about ColostrumPBI Parlor Systems: Standing the Test of...
view all issues