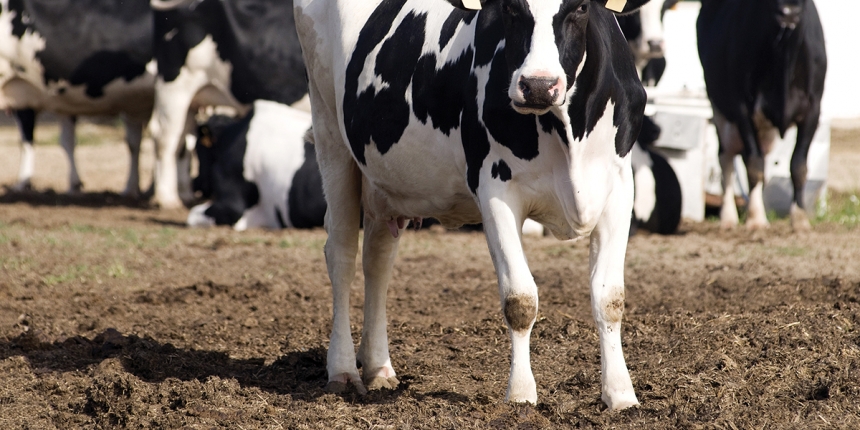 Internal parasites can be a problem for cattle, but many factors determine whether or not they are a big enough problem to worry about.  Large numbers of worms can impact health and growth; young cattle that are heavily infested don’t grow as well as they would otherwise.  Dairy heifers may or may not have very many worms, however, depending on how they are raised and the environment they live in.

Scott E. Poock, DVM, DABVP, Associate Extension Professor, University of Missouri says that heifers on pasture are more likely to pick up worms.  “When I was in practice in Wisconsin 30 years ago, I participated in a project that looked at pastured heifers, checking fecal egg counts.  If heifers are on pasture, they are exposed to worms and generally have enough worms that you’d want to deworm them,” he says.

“Heifers raised in confinement systems, where manure is removed daily and they are never on pasture grazing, rarely have very many worms.  Even if they get exposed and end up with a few worms and pass some worm eggs in their manure, if the manure is cleaned up every day, there is very little chance for them to be re-exposed.”

The worm life cycle depends on eggs hatching and the larvae moving onto forage plants to be eaten by a grazing animal.  If the heifers are not on pasture, there is very little risk for exposure.

Even if heifers are in confinement and never on pasture, this does not mean you don’t have to worry about parasites.  “External parasites like lice and flies can still be an issue and need to be addressed, but the internal parasites will be minimal,” he says.

Cattle on pasture are the ones to worry about in terms of worms, but the risk will vary depending on how the pastures are managed and grazed.  “If you have an intensive rotational grazing system in which the animals are moved to new grass frequently, worms may not be a problem,” says Poock.

“Internal parasites have what we call a prepatent period; this is the length of time from when the egg passes out of the animal onto the ground, until the time it actually becomes infective,” he explains.  The eggs hatch into larvae and go through several phases of development; the fourth larval stage (in which the larva has moved onto a nearby forage plant) is infective.  This generally takes 21 to 28 days from the time the egg is passed with manure.  If an animal ingests the egg itself, or the first larval stage after the egg hatches, the parasite is not yet ready to continue its life cycle within a host.

“In a grazing system, if your rotation (and move to new pasture) is shorter than 21 to 28 days, you move the cattle away before those worms can re-infect them.  When I first arrived in Missouri, we did some deworming projects and looked at worm burdens in certain animals. What we observed was that if a producer can avoid that 21 to 28 day period in rotation on a pasture, worm burdens are very low, almost non-existent,” he says.

“But if you hit those periods and have cattle in that same area of pasture after the worms become infective, there will be exposure; the animals will pick up worms.”  Thus timing is important, in avoiding exposure.

“If your heifers go out on pasture where there are also mature cows (which are generally shedding worm eggs) and are not moved very often, they probably are exposed.  In beef operations, we often deworm cattle after a certain length of time after turnout on grass, since it’s usually a herd that is on the same calving schedule.  The cows are all calving about the same time; the calves are roughly the same age, so we can time the deworming to be most effective for those animals,” he says.

“By contrast, many dairy operations calve year-round. The heifers are different ages.  Many dairy producers just pick strategic times for deworming, if the cattle are at pasture.  It’s common to deworm when the calves are 4 to 6 months of age if they are being worked at that point.  Heifers can also be dewormed pre-breeding.  They are usually dewormed when moved into the pre-fresh group—maybe 3 to 4 weeks before calving—or dewormed at calving.  In that situation, a person must be careful to select a deworming drug that is approved for lactating animals,” says Poock.

It is important to read labels and work with your herd health veterinarian to determine what is best to use.  “If you pick the wrong dewormer, you will be discarding milk for a long time,” he says.

“The last two years, both for beef and for dairy cattle, I’ve used the LongRange ® injectable dewormer (that delivers 150 days of extended-release parasite control with just one dose), for the grazing dairy herd at the University of Missouri, as well as my own beef cattle.  The dairy heifers would be prebreeding age, as yearlings.  I used LongRange ® dewormer on the pasture heifers, not only for internal parasite control, but also for some fly control, even though it is not specifically labeled for that.  We seem to get fairly decent fly control with this product,” he explains.

The important thing about controlling flies on dairy heifers is that biting flies can damage the ends of the teats and potentially transfer bacteria from one animal to another.  This may result in infections, which can be a problem when those heifers freshen.  They may have had mastitis and end up with a blind or infected quarter or two.   Some people don’t think about the possibility of mastitis in heifers that haven’t calved yet, but it can readily happen if there are many flies. Parasite control is important—for both internal and external parasites.

It helps to understand the life cycle of internal parasites, and when you need to worry about deworming, or not.  “If a heifer has been raised in confinement and hasn’t had exposure, you don’t need to waste money on deworming.  By contrast, if heifers have been exposed to worms, you should evaluate the situation and determine when to deworm them,” says Poock.

Even if cattle have recently picked up worm larvae, it takes a while before those worms mature in the animal and start laying eggs, so it may be a little while before you find worm eggs in a fecal sample.  By that time the worms have been living within the host for a certain length of time and have already done some damage.

It’s also important to know if the dewormer you use is effective. “With our grazing dairy herds, we did fecal egg count reduction tests—checking egg counts at the time of worming and again later, to see if the dewormer was effective.  You take a manure sample, count the eggs, and then deworm.  Two weeks later another sample is taken to see what the drop is in the egg count.  This tells you whether the drug worked.”  In some regions, certain worms are becoming resistant to deworming drugs.

“We also could tell the difference in worm levels during different times in the grazing season. In the spring, grass is growing fast and cattle are moving quickly through the rotations; they aren’t staying long enough in one place to pick up worms from the eggs that were passed.  Fecal egg counts were very low, even in herds that historically didn’t get dewormed.”

If you rotate through the pasture fast enough, you leave the larva behind, and they don’t last long in the heat of summer.  By the time cattle come back to that pasture, the worm larvae are no longer viable.   By mid-summer, however, pasture rotations are slower and the cattle may be in a certain pasture long enough to be re-exposed.  Thus, pasture management is just as crucial for worm control as deworming.

If cattle are grazing a certain pasture continuously, they keep eating the forage where worm eggs have been deposited and picking up larvae that have become infective.  As the worms complete their life cycle within the host, those animals keep shedding more worm eggs into the environment.

“Work with your veterinarian on a worm control program, understand the life cycle of the parasites you are trying to control, understand potential exposure—and pick the right products to use,” says Poock.

You usually can’t tell if a heifer has worms just by looking at her.  Effects are usually subtle unless the animal is heavily infected.  “When using LongRange ® on beef heifers, we weighed the heifers periodically and were getting 2/10 of a pound more gain per day in situations with continuous grazing, compared with the heifers that were not dewormed.  But to just look at the group of heifers, you couldn’t tell—unless you ran them across a scale.”