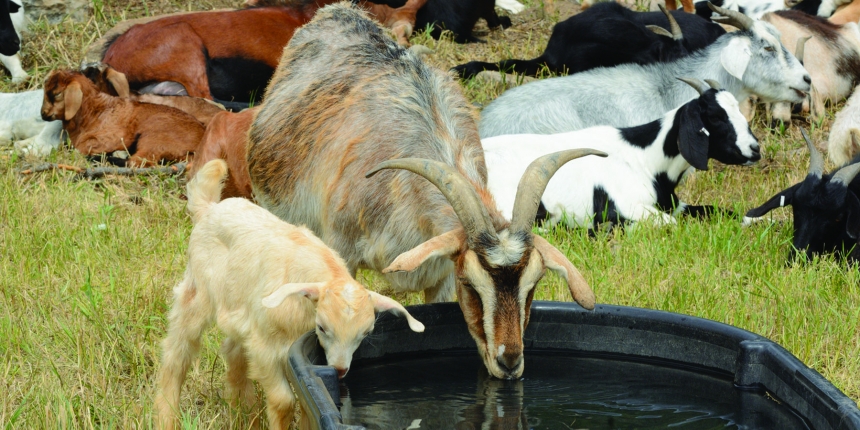 Is Heat Stress an Issue?
Livestock produce heat from the digestion of feed for physiological processes such as lactation, gestation, growth, and maintenance; as more feed is consumed, more heat must be dissipated. Heat stress is prevalent in most livestock species, but especially in dairy animals where large quantities of energy are necessary to sustain milk production. Both dairy goats in lactation and meat goats, which are being fed for growth, are susceptible to heat stress. Knowing the physiological signs (such as panting or excessive drinking) can make heat stress more apparent.

The economic implications of heat stress occur most obviously through decreased dry matter intake, decreased milk pro- duction, and depressed levels of solids (non-fat) in dairy cattle (Ominski et al., 2002). However, reproduction is also compromised. Ingraham et al. (1974) ob- served reduced conception rates related to heat stress, with a decline in conception rate from 55% to 10% as the average daily temperature humidity index (THI) increased from 70 to 84. Many studies have utilized a THI and related that to physiological responses to determine dif- ferent thresholds for levels of heat stress. The THI calculates a value relatable to degrees Fahrenheit based on the dry bulb temperature, the temperature read from a thermometer, and an interaction between temperature and humidity. This interaction of humidity and tempera- ture is especially important in species which depend largely upon sweating and panting because a higher humidity reduces their ability to utilize this cool- ing pathway; as a result, a different THI is necessary to more accurately predict heat stress in different species. While the exact values in THI and production losses will be different with dairy cattle compared to goats, the trend to reduced performance with high THI is consistent.

In comparison to cattle, goats are bet- ter suited to hot environments due to a smaller body mass in addition to lower maintenance feed requirements and high digestive efficiency (Silanikove, 2000). Nonetheless, they do still undergo heat stress, and variations between breeds, including sweating rate and coat thick- ness, can influence heat stress levels for goats. Salama et al. (2014) noted ideal THI of 60-65, where THI is defined as:
THI=(1.8 TDB+32)-[(0.55-0.0055
RH)(1.8 TDB-26.8)] where TDB is dry bulb temperature (°C)
RH is relative humidity (%)
When this THI was above 65, dry matter intake and milk production both decreased in dairy goats; while the milk production decrease was not as critical, the coagulation properties were compro- mised, making heat stress management of particular interest to goat cheese pro- ducers (Salama et al., 2014). Toussaint also provided recommendations for temperature and humidity for goats. He suggested a targeted range of 50 to 64°F with a minimum temperature of 43°F and a maximum of 80°F and a maximum rela- tive humidity of 60 to 80% (1997). Based upon both studies, we have developed a target THI range from 55 to 70 (Figure 1) based upon outside temperature and rela- tive humidity. For conditions indicated by a red background, goat performance would be improved by providing some cooling strategies; for the conditions in- dicated by blue, goat performance would be improved by supplemental heat or protection from weather.

Currently, many of the goat housing recommendations do not take heat stress into sufficient consideration. There are three reasons heat stress is not often the priority when designing barns for goats. First, there is simply not a lot of published quantitative data for farmers to see prob- lems and costs associated with heat stress in goats. Also, goats have a decreased cold tolerance relative to other livestock, which increases the temptation to de-across all livestock. 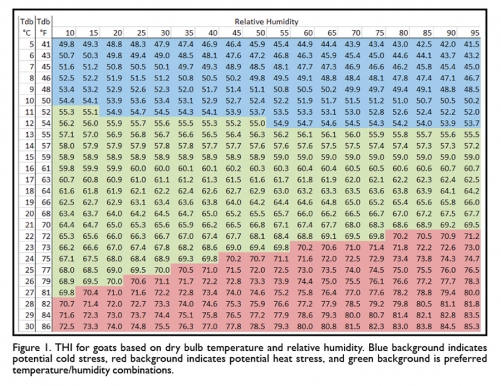 Cooperative Extension Service | Agriculture and Natural Resources | Family and Consumer Sciences | 4-H Youth Development | Community and Economic Development sign barns to exclusively manage cold weather concerns. Barns are built with low ceilings and small openings to keep them warm in the winter, which results in barns trapping heat. Finally, barns are most frequently designed and managed with producer comfort and convenience in mind. Often farmers do not recog- nize that a comfortable temperature for humans may not be a comfortable tem- perature for their goats. Considerations in Goat Barn Design (AEN-149) has more details about barn designs.

How Goats Cool Themselves
The dominant method of transferring heat from a goat can vary based upon the air temperature and humidity. When the air is cooler than the animal’s surface, the animal will lose heat to the air. As the air temperature warms, the smaller tem- perature difference between the animal and air slows heat transfer, and eventually the goat can be cooler than the air, which means the goat receives heat from the air. In such circumstances, evaporative cool- ing becomes crucial. In order for water to change from a liquid to a vapor, it needs a heat source, like the goat. Evaporation will remove heat from the goat; however, it is critical that the humidity not be very high. Evaporation rates are increased when air passing above the coat has a lower humidity; as humidity levels rise the amount of heat a goat can dissipate will decrease. Also, higher air speeds allow a greater evaporation rate thereby providing additional cooling capacity. At lower temperatures, most evaporation occurs from the lungs, but at higher tem- peratures as much as 85% of a dairy cow’s evaporative heat transfer occurs through sweating, while the remainder is through the lungs (Maia and Loureiro, 2005). The rate for heat transfer is affected by the hair coat thickness, hair density, and hair count.

Sweating is also an important mechanism of heat dissipation in goats. Borut et al. (1979) studied goats both walking and at rest in a chamber and desert con- ditions. In the chamber, goats dissipated heat primarily by panting. However, desert conditions resulted in a solar radiation load and evaporative cooling oc- curred largely through sweating. When evaporative heat loss in goats was studied by de Melo Costa et al. (2014) in an ex- perimental setup similar to that of Maia and Loureiro (2005) with dairy cattle, sweating rates were found to be lower in goats in both shaded and unshaded conditions than in cows.

Intuitively, one would expect lighter- colored goats to be less prone to heat stress due to decreased absorption of solar radiation. However, this expecta- tion has been met with mixed results. Darcan et al. (2009) found pigmented goats to be more tolerant to heat condi- tions than unpigmented goats, especially noting differences in activity. Olfaz et al. (2011) found no significant variation in milk production or kid growth to reflect differences in pigmentation. Overall, genetic factors seem to play a major role in determining heat tolerance (Romero et al., 2008); such genetic differences are more important than pigmentation differences.

Strategies to Reduce Heat Stress
In order to reduce heat stress, there are a couple strategies that could be implemented. First, solar load on the goats can be reduced by providing shade. Shade reduces one major component of the heat load on the goats. The goats can also be wetted (water added) to increase the rate of evaporation. Because goats have lower sweating rates than cattle, in moderate and low humidity climates, adding water to the goats can provide very effective additional cooling. The third strategy is to provide air speed by using fans. Additional air speed can both increase the rate of evaporation and the rate that heat is transferred from the goats to the air.

Protection from heat loads imposed by solar radiation has been shown to increase feed intake and milk production in cows (Muller et al., 1994). Use of shade has also been observed to increase with increasing ambient temperature, with- out compromising lying or grazing time (Tucker et al., 2008). Shades in pasture are good option on farms that do not typically keep the goats in a barn or on farms that do not readily have electricity or water for cooling.

Sprinkling systems in combination with fans have been very effective in reducing rectal temperature and milk production in cattle (Bucklin et al., 1991; Her et al., 1988). Similarly, some work has been done to evaluate heat stress man- agement strategies in a goat production environment. One particularly interest- ing study uses the fan and sprinkler setup described by Turner et al. (1997) for dairy cattle; with this setup, Darcan and Güney (2008) obtained 21% greater milk yield in cooled goats, despite only cooling for one hour daily. Ocak et al. (2009) used fans and sprinklers (both separately and in combination) to cool kids and found fans to be particularly effective.

What to do if you think your goats are in heat stress
• Make sure you have placed the goats in an area that has shade. For kids or highly heat stressed goats you may need to move them to the shade.
• Make sure the goats have an adequate supply of fresh drinking water.
• Use fans to cool the goats. Ceiling fans, drum fans, and some mounted fans are all effective at moving enough air to cool the goats.
• Wet the goats. This can be done with a hose, a sprinkler, a bucket of water, or even by giving them access to a small pond or kiddie pool (non-chlorinated water).
• Consider adjusting the feeding pro- gram and/or dietary energy after consulting your nutritionist. Often feeding animals in the evening al- lows them to dissipate more of their metabolic heat load during the cooler nighttime hours. Many cattle farmers and ranchers will lower energy content of diets during heat waves to protect cattle from the heat loads associated withhighenergy diets. Also make sure mineral is available; mineral availability will increase water consumption.
• Contact your veterinarian if you are concerned for the goats’ wellbeing. 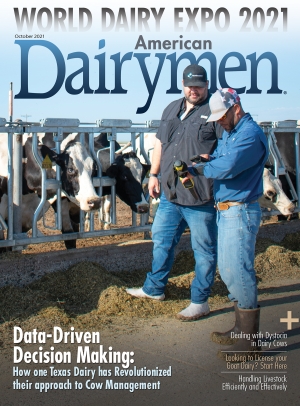 In this IssueHeat Stress Mitigation Is A Worthwhile InvestmentImportance of Dairy Barn VentilationTaking Milking To the Next LevelIowa Dairy Goats: Survey Shows Potential for Growth and Improvement
view all issues