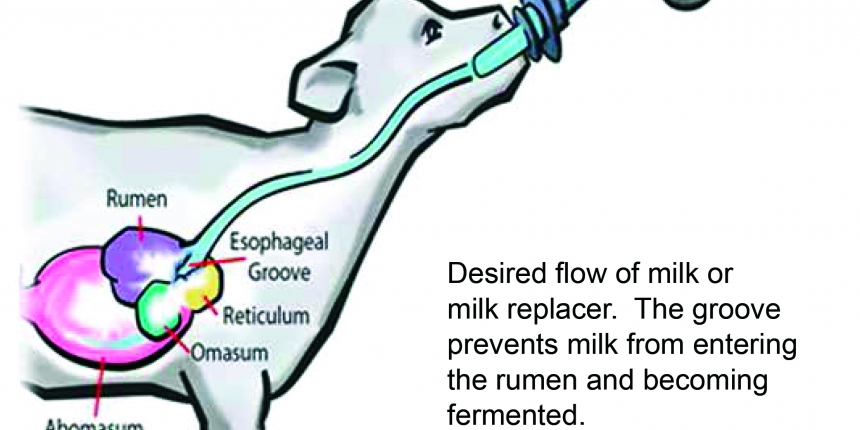 Do you ever have calves that develop rough hair coats, appear depressed or ill-thrifty, and have poor growth? They may be suff ering from rumen acidosis caused by “rumen drinking.”

What is Rumen Drinking? 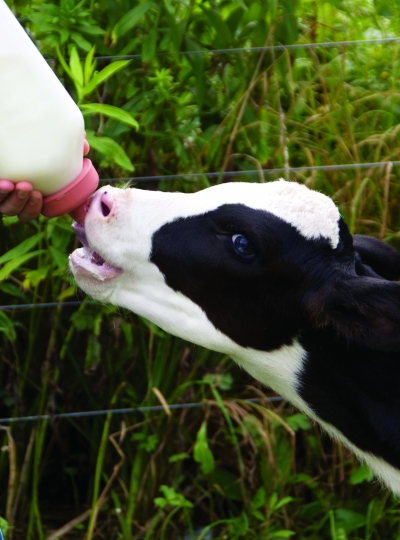 “Rumen drinking” is caused by failure of the reticular groove reflex, and it results in rumen acidosis in calves on a liquid diet. The reticular groove, also called esophageal groove, is a muscular structure inside the stomach that acts like a tube. Its job is to shunt the milk into the abomasum, preventing the milk from entering the rumen. (See illustration above.) When the reticular groove partially or completely fails to close, milk spills into the rumen and is fermented to lactic acid.

This acid formation is not desired and decreases the pH in the rumen causing inflammation in the lining of the stomach. If this inflammatory process happens on a regular basis, the lining of the gut becomes irritated and thickens. The thickening of the wall of the gut decreases the ability of the stomach to contract and absorb nutrients, thus causing malnutrition and bloat. The lactic acid that is produced when milk is digested in the rumen, can be absorbed into the calves system causing depression and general weakness.

What triggers the esophageal groove to close?

Closure of the esophageal groove occurs when calves are stimulated to drink milk or milk replacer. When a calf drinks milk from a bottle or bucket a cascade of events stimulate the nervous system which “communicates” to the muscles of the groove. The closure of the groove does not happen when the calf drinks water, only milk. This response fades by a few weeks after weaning.

What causes dysfunction or failure of the groove?

There are a number of conditions that can make calves more susceptible to rumen drinking caused by failure of esophageal groove closure. These include:

There are 2 types of dysfunction:

PRIMARY DYSFUNCTION: occurs as a result of stressful situations (prolonged transport, grouping,change in feeding techniques), especially in bucket-fed calves. Signs may not appear until after a few weeks from arrival.

SECONDARY DYSFUNCTION: occurs because other diseases have caused the calf pain and fatigue. In these cases the signs of rumen acidosis may be less apparent due the underlying disease, like scours or respiratory disease. Typically if treatment of the primary disease is successful, the groove will regain normal function.

What are visible signs of rumen drinking in a calf?

Signs of rumen acidosis due to rumen drinking:

What can be done to prevent and treat rumen acidosis?

Prevention is the key because the prognosis of calves chronically affected is poor. Management factors that support prevention are: rapid detection and treatment of sick calves due to other illnesses, feeding milk/milk replacer at the right temperature, feeding at the same time every day and limiting environmental stressors.

Repetitive force-feeding/tubing calves that do not want to eat can cause rumen acidosis or worsen the situation by providing a substrate for further fermentation. Calves that are suspected rumen drinkers should be fed smaller and more frequent meals until symptoms resolve. If necessary sick calves can be tubed with warm electrolytes to help buffer the liquid in the rumen.

SAFETY TIP: Organisms that cause diarrhea in calves such as Salmonella and Campylobacter are transmissible to humans and other animals. Always wear rubber gloves and thoroughly disinfect after handling calves. 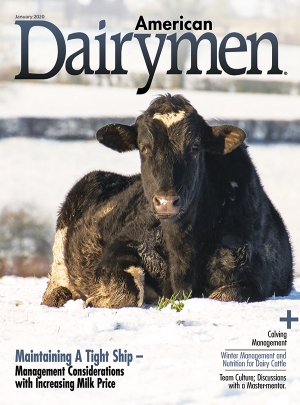