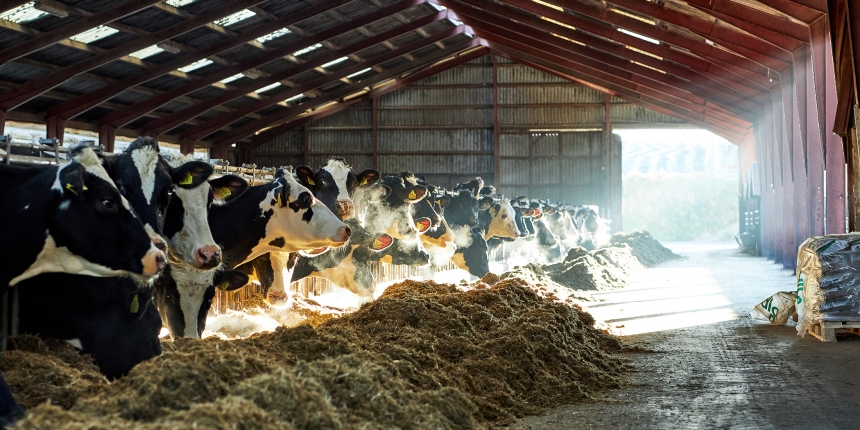 No doubt that you’ve read numerous articles on footbath management; but, few tell you the common mistakes that impact the success of your footbath program.

Most footbath product labels include generic management protocols which are effective when “accurately” implemented.  Although there are many points where footbath accuracy can be lost, let’s focus on the top four mistakes that are key to achieving maximum value from your footbath.

Common Mistake #1 - Water volume
Often, footbath manufacturers quote their volume based on a complete fill when placed on a level surface.  To best determine the “working” volume in your footbath, the measurements should be taken with the footbath in its normal use position and filled to no more than one inch from the top at any point.  This reduces sloshing in the first few cow passes which lead to loss of volume and effective cow passes.

The depth measure should be taken at the absolute middle of the bath as this provides the average depth.

Accurate water volume is critical for determining treatment product inclusion rate and cow passes.  Placing a plastic ruler or marked measure with the correct depth next to the footbath reminds employees the importance of accurate footbath fills and provides a quick tool to verify fill accuracy.

There are two potential mistakes:
• Overfill –  Adding the correct footbath product measure to an overfilled footbath results in a diluted treatment solution that is less effective for every cow walking through the bath.

Common footbaths near 6 ft. length calculate 10 gallons for every inch depth. If the appropriate middle depth is 5 inches but is overfilled to 6 inches, the volume increases from 50 to 60 gallons. That’s an increase of 20% volume but decrease of 20% treatment concentration.

• Underfill – Adding the correct footbath product measure to an underfilled footbath produces a more concentrated footbath solution.  If we use the same example as above, one inch less middle-depth fill produces a footbath with a 20% decrease in volume; but an increased solution concentration greater than 20%. 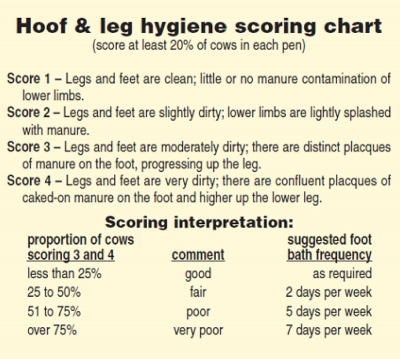 Depending on the product, this increase may produce a greater acidity (lower pH) which may be detrimental to hoof tissue.  In addition, footbath contamination of manure, urine, mud, etc. is similarly concentrated which reduces effective cow passes.

Most dairy producers and nutritionists would never accept the variation in rations that are commonly found in footbath concentrations on some of the best managed dairies.

Common Mistake #3 - Cow Passes Before Refill
A cow pass is often defined as one cow walking through the footbath.  However, was it an “effective cow pass” with the antibacterial benefit to kill harmful heel wart and foot rot bacteria?

Many footbath product labels provide ranges of 300 to 500 effective cow passes based on the common 50-gallon footbath volume.  Producers often accept the higher number, representing ideal management, rather than the lower number which considers common on-farm conditions and is more realistic. If the treatment cost is $25 per 50-gallon bath, 500 cow passes would cost $0.05/cow pass compared to $0.083/cow pass at 300 passes.

Some products suggest optimum pH ranges for effective cow passes.  Few dairy producers monitor pH by cow pass to establish a baseline of maximum number of passes.  In addition, changes in water alkalinity can greatly impact pH ranges. If pH is used to determine footbath cow passes, it should be routinely monitored rather than accept a single initial measure.

Ideally, each rear hoof should have at least two immersions. The University of Wisconsin School of Veterinary Medicine has researched footbath length with rear hoof immersions (shown below). 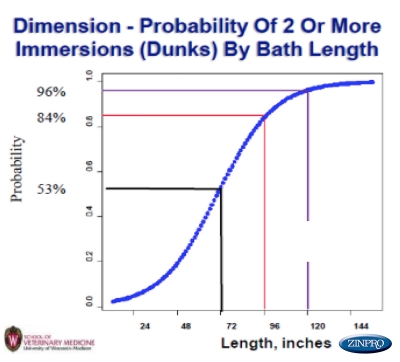 The common question is why are so many poly footbaths near 6 ft. if they do not provide adequate rear hoof immersions?  The answer is simple - most do not have plugs and this length is more easily dumped and cleaned.

These shorter baths can still be very useful if placed end-to-end providing a total footbath length near 12 ft.  Producers immediately respond that this requires more treatment product and cost.  NOT TRUE. Effective cow passes are a function of footbath volume, which is doubled by using two short baths end-to-end.

Common Mistake #4 - Footbath frequency
Frequency for an effective footbath program is much like to teat dipping.  Teat dipping does not cure mastitis; but prevents the spread.  Similarly, a footbath program should be run frequently enough to control the spread of bacterial hoof problems rather than wait for a widespread outbreak.

Footbath frequency can vary from every milking to “as-needed” based on the prevalence of heel warts or foot rot acceptable to the dairy producer.  An effective footbath program results in a hoof trimmer report of less than 10% of the trimmed-cows requiring treatment for heel warts or foot rot.  The frequency needed to produce this result is based on the efficacy of the treatment product and cleanliness of the hoof and cow environment.

If Dr. Cook’s recommended frequency does not produce acceptable hoof health in a properly prepared footbath, the product efficacy or “scheduling of treatments” should be questioned.

Scheduling of treatments refers to the chosen days each week for treatment.  It is common to hear producers say they run treatment three times a week on Monday, Wednesday and Friday. However, running the footbath on consecutive days provides a more effective bacterial kill than spanning treatments over time.

Remember, each mistake impacts the effectiveness of your dairy’s footbath program and multiple mistakes compound the problems. Management’s best understanding of a footbath protocol and a quality product, can still produce poor hoof health.  Each verbal transfer or translation of the footbath program is an opportunity for misunderstanding.  Written protocols are a must.

Review your footbath procedure for any of these common pitfalls. Make sure everyone knows the proper protocols and routinely monitor that they are being followed. 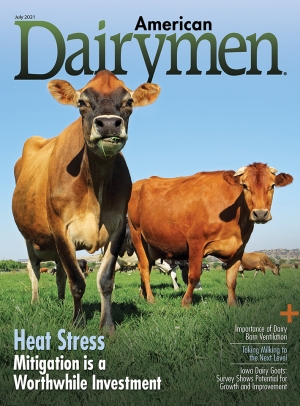