The use of Malate in Cattle 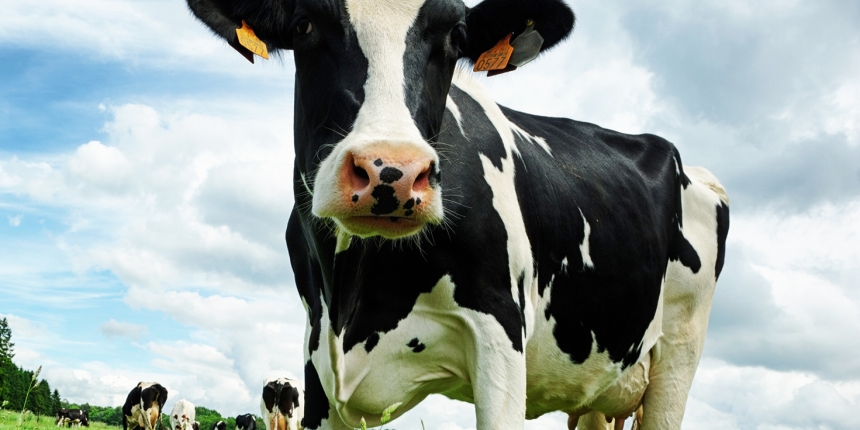 The use of Malate in Cattle

Selenomonas is a genus of bacteria which generates propionic acid by oxidation of lactate through the succinate pathway (Paynter and Elsden, 1970). Malate is known to be used by Selenomonas bacteria for its own growth (Linehan et al. 1978). As shown by Nisbet et al., 1991, Selenomonas increased the consumption of lactate when malate was added to the culture. In the study of Evans and Martin, 1997, S. ruminantium was only able to grow in a pH 5.5 medium when malate was added. Malate is proposed as a lactate fermenter when the ruminal pH drops.

As lactate is the primary reason for ruminal acidosis, malate has been found to be of high interest in reducing acidosis due to its effect on lactate utilization by ruminal bacteria. Malate can also change the dynamics of microbial populations by serving as a nutrient to S. ruminantium. All of this provides a higher ruminal pH which, leads to more beneficial conditions for cellulolytic bacteria.
It is relevant to highlight, that Selenomonasruminantium can count for up to 51% of total bacteria in the rumen (Caldwell and Bryant, 1966). Therefore, the addition of malate to the diet may result in an important impact on the ruminal digestion.
While other organic acids have been considered, malate is found to be the most effective on Selenomonas’ lactate uptake (Nisbet and Martin, 1990). 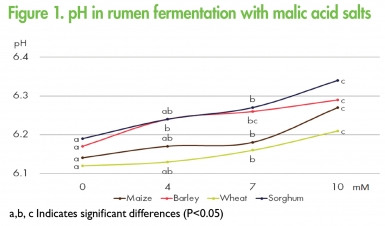 In Vitro Studies
In vitro studies simulate ruminal conditions. They allow for an easier management and data collection than in vivo studies.
Martin et al. (1995) showed an increased on total volatile fatty acids (VFA), propionate and pH when a disodium salt of malate was added.
In diets with a 50:50 proportion between concentrate and forage, Carro et al. (1999) found that malate increased the digestibility of the hemicellulose, increased propionate production and decreased methane production and lactate.
Martin et al. (2000) suggested that malate plus sugar stimulate ruminal fermentation.
Carro et al. (2003) tested the effect of malate salts on different cereals (maize, barley, wheat and sorghum). They showed that total VFA and pH (figure 1) linearly increase along with increasing amounts of malate. Additionally, malate increased the fermentation rate of all substrates, the production of propionate and butyrate and decreasedacetate:propionate ratio, lactate concentration (figure 2) and methane production. 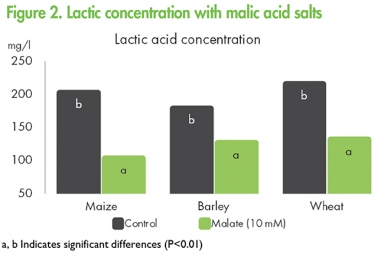 Gómez et al. (2005) did not find differences in pH values when disodium malate was added. But they found a higher disappearance for DM, NDF and ADF. Also a higher production of propionate and a decreased on the methane:VFA ratio. These effects generated a greater response when diet contained grass hay instead of barley straw.
Sniffen et al. (2006) found a better fiber disappearance when malic acid was supplemented, and a higher N-microbial production. However, they did not find significant changes in pH or VFA.
Other authors, e.g. Li et al. (2009), and Li et al. (2010) also found results in the same direction.

In Vivo Studies
In steers, as in in vitro studies, Martin et al. (1999), found a linear relationship where ruminal pH increases along with increasing doses of malate. The same study showed a decrease on total VFA and an increase on acetate. Regarding animal performance date, the study suggests that DL-malate alleviates subclinical acidosis of steers consuming high-grain diets, it improves feed efficiency and average daily gain (ADG).
In dairy cows, Sniffen et al. (2006) found that cows supplemented with malate had a greater milk yield. This result was also seen by Wang et al. (2009), and Guasch et al. (2017). In addition, results from Wang et al. (2009), suggest a higher nutrient digestibility and energy availability for the diets containing malate.Although, Devant et al. (2007), did not find any increase on milk yield, they did find a trend after the 3rd week. The study concluded that malate supplementation may allow greater concentrate intakes during transition period. Foley et al. (2009), did not find any milk yield increase. However, there is an important difference with the other studies: cows were grazing. So, cows may have already received malate in the diet from fresh pasture.
Sodium DL-malate in combination with urea has also proved interesting for dairy cows with diets based on cassava chip (Khampa et al., 2006) regarding the rumen ecology changes andtheefficiency on microbial protein synthesis. In parallel, the same author added increasing amounts of sodium-DL-malate to cassava chip diets of dairy steers resulted in higher ruminal pH values, increase of propionate and a trended increase on microbial protein. Additionally, malate increased the population of amylolytic, proteolytic and cellulolytic bacteria species. 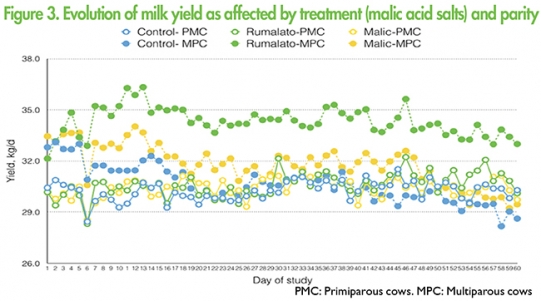 Evaluation of Different Malate Sources
The most common malate sources are malic acid, sodium and calcium salts of malic acid. Malic acid salts are supposed to be more effective at increasing pH due to its lower hydrogen supply and the presence of sodium in some salts. Sodium has an inductive effect to increase lactate uptake by Selenomonas (Nisbet and Martin, 1994).
All previously mentioned studies are done either with malic acid oramalate salt, but there is only one study comparing malate source influence on dairy cattle. This study was published recently by Guasch et al. (2017) during the congress of the American Society of Animal Sciences (ASAS) with more positive results for the salt.
The study of Guasch et al. (2017), found that malic acid saltshad greater effect on milk yield than malic acid in mid-lactation dairy cows (figure 3). Only malic acid salts increased milk   yield and total fat production compared to a control group, whereas malic acid increased milk yield but did not have any effect on total fat production as shown in table 1.
Additionally, Guasch et al. (2017), showed a higher feed intake for the cows consuming malic acid salts. This may be explained due to a higher pH resulting from the salts, rather than possibly lower values from the addition of the acid, which would be more favorable

for cellulolytic microorganism’s growth. This leads to a more effective digestion process, that would result in the rumen emptying faster and a higher feed intake (FI) capacity. High FI capacity is important for cows that are producing milk and carrying the fetus at the same time. If it is a primiparous cow she is also using nutrients for her own growth at this stage as well. 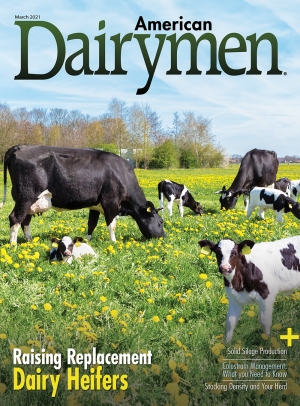